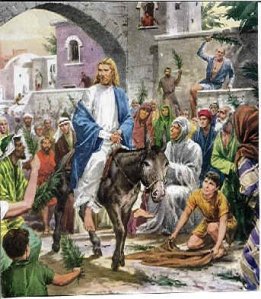 When Jesus entered Jerusalem riding on an ass,

The prophecy of Zechariah at last had come to pass,

The population welcomed Jesus as their King,

And their loud hosannas all of them did sing.

Some cut down branches down from the trees,

And strewed them in His path,

But all of this only added to the Jewish leaders wrath,

For they were not prepared to except the claims that he had made,

And the acclamation of the people only made them more afraid,

For if, Jesus was allowed to set up a Kingship of his own,

They would loss the powers, which under Herod they had known.

A revolution now would bring this to an end,

And they felt that their position was one they must defend,

And so they began to plot and scheme and arranged for his arrest,

And dragged him into the judgement Hall where Pilate put him to the test.

Pilate asked some questions, the called the proceedings to a halt,

And he told the Jewish leaders “That in Him I find no fault,

But there is a custom that at Passover a prisoner is set free,

If I release Jesus to you it would be satisfactory to me”.

But the Jews called out “crucify him” His death we want to see,

You are no friend of Caesar’s if you set him free.

So, Jesus was lead away to die to satisfy the Jews,

Today his death would have been headline news,

But at that time no one looked at the cross in dismay,

For two others were also crucified on that very day.

No one realised that it was such a tragic loss,

But it was the Son of God, who was hanging on that cross,

He was hanging there as a sacrifice from sin to set us free,

And to pay the price that God demanded on behalf of you and me.

Comments Off on Triumph and Despair