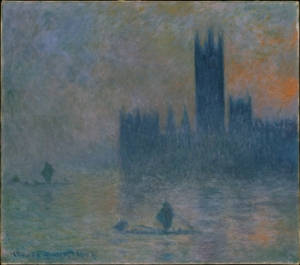 William Henry Davies was born in Newport, Monmouthshire, Wales. His father was, at the time a Publican. After an apprenticeship as a picture-frame maker and a series of labouring jobs, he travelled to America, first to New York and then to the Klondike.

He returned to England after an accident whilst jumping a train in Canada, where he lost a foot. Upon his return to Britain he led a poor, hard life living in London lodging houses and as a pedlar in the country. He married in 1923, Emma, who was much younger than he. His first poems were published when he was 34.

I saw the fog grow thick,

Which soon made blind my ken;

It made tall men of boys,
And giants of tall men.

It clutched my throat, I coughed;
Nothing was in my head
Except two heavy eyes
Like balls of burning lead.

And when it grew so black
That I could know no place,
I lost all judgment then,
Of distance and of space.

The street lamps, and the lights
Upon the halted cars,
Could either be on earth
Or be the heavenly stars.

A man passed by me close,
I asked my way, he said,
“Come, follow me, my friend”—
I followed where he led.

He rapped the stones in front,
“Trust me,” he said, “and come”;
I followed like a child—
A blind man led me home.

Comments Off on The Fog

I am an author writer publisher web administrator I run poetry workshops in the community. My published Manners childrens poetry book can be found at www.waterstones.com
View all posts by poetreecreations »
← THE DEPARTED RETURN
Snow →