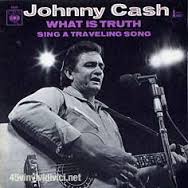 Did you know Mohammad Ali wrote a poem for Johnny Cash which Cash later recorded as a song called“What Is Truth?”

I always liked how Johnny Cash always wore black on stage. He was a very single-minded man. Cash recounts the story in his autobiography. He met Ali on a flight when Ali crashed first class to see who had taken up all the seats forcing him to fly economy. It turned out to be JC and his entourage. Ali then sent him this poem which Johnny kept locked in a vault until the right opportunity arose to record it.

Here are the words of the poem Ali, another single-minded man, wrote to Cash. Mohammad Ali, boxer and poet!!!

The old man turned off the radio
Said, “Where did all of the old songs go
Kids sure play funny music these days
They play it in the strangest ways”
Said, “it looks to me like they’ve all gone wild
It was peaceful back when I was a child”
Well, man, could it be that the girls and boys
Are trying to be heard above your noise?
And the lonely voice of youth cries “What is truth?”

A little boy of three sittin’ on the floor
Looks up and says, “Daddy, what is war?”
“son, that’s when people fight and die”
The little boy of three says “Daddy, why?”
A young man of seventeen in Sunday school
Being taught the golden rule
And by the time another year has gone around
It may be his turn to lay his life down
Can you blame the voice of youth for asking
“What is truth?”

A young man sittin’ on the witness stand
The man with the book says “Raise your hand”
“Repeat after me, I solemnly swear”
The man looked down at his long hair
And although the young man solemnly swore
Nobody seems to hear anymore
And it didn’t really matter if the truth was there
It was the cut of his clothes and the length of his hair
And the lonely voice of youth cries
“What is truth?”

The young girl dancing to the latest beat
Has found new ways to move her feet
The young man speaking in the city square
Is trying to tell somebody that he cares
Yeah, the ones that you’re calling wild
Are going to be the leaders in a little while
This old world’s wakin’ to a new born day
And I solemnly swear that it’ll be their way
You better help the voice of youth find
“What is truth”

I am an author writer publisher web administrator I run poetry workshops in the community. My published Manners childrens poetry book can be found at www.waterstones.com
View all posts by poetreecreations »
← Poet Laureate Carol Ann Duffy’s new War Poem Last Post
In My Garden →