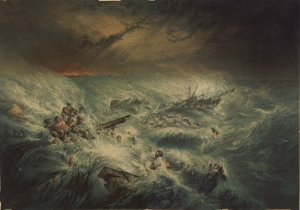 A wicked gale, 1841,
Took all souls, both old and young.
Among the shipwrecks off the Cape,
No sadder story leaves mouths agape.
Seven ships were swept like splintered trees as
Sailors fought the rising seas.
Fifty-seven lads left that cursed day,
From Truro Harbor through Cape Cod Bay.
With farewells to families and prayers of thanks,
To fish for cod along George’s Banks.
Headed nor ‘east at full sail,
The hopefuls met that dreaded gale.
Soundings dropped as winds blew wild,
And fear spread from man to child.
For closer their vessels approached the shoals,
Which cut their hulls with ripping rolls,
Nature took victims without remorse,
And most were lost who’d set the course.
Legend has it that on autumn nights,
Amidst Truro’s moors, below the heights,
Ghosts of sailors mourn their ghastly plight,
With frightful wails across the night.
So if you dare to brace that wicked wind,
You may hear cries of those doomed kin,
Brothers of the sea who dared to go,
Where others still venture and fight the foe.
Wendy Shreve
(In honor of All Hallows’ Eve and those spirits who are still with us)
NOTE: This poem is based in part on real events off Truro, MA in 1841 (Source: Provincetown Banner, June 28, 2009). The legend is fiction.