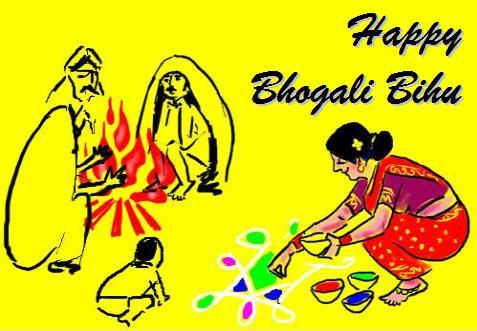 Season’s yield,
Granaries filled,
Mid-January,
Festival Bhogali.
Uruka evening,
Enjoyment and feasting,
Building the Bhelaghar,
Pranks with the neighbour.
The morning after,
Obeisance to the God of fire,
Burning the tall Meji,
Made of bamboo and paddy.
Sunga pitha, kaath aloo,
Customary delights of Magh Bihu,
With friends and families,
Flavours of Assamese delicacies.

Short note: Bhogali Bihu is a harvest festival of Assam, a state of north-east India. The festival is celebrated in mid-January, marking the end of the harvest season. Bhogali means feasting and enjoyment. It is also known as Magh Bihu as celebrations are held in the month of Magh, the tenth month of the Assamese calendar. On the eve known as Uruka, people gather for a community feast with friends and families. A variety of dishes that include meat and fish are cooked over wood flame. Using bamboo and paddy, a temporary hut called Bhelaghar and a tall structure known as Meji are built. Merriment continues throughout the night as youths play pranks like stealing vegetables from the neighbour’s garden. Next morning, offerings are made to the God of fire and people enjoy the traditional delicacies like sunga pitha, kaath aloo etc.

Comments Off on Bhogali Bihu -Promote Yourself